A few days before we had to go to Tampa Florida for FetishCon, my Living Room Ceiling Fan stopped working as well as one Outlet. I called our Landlord and he gave me the Number of his Electrician. I called them and left message that I needed to set up an appointment. When we were in Florida I saw I had a few missed messages from the Electrician. When I got a chance, I called the Electrician Back and set up an appointment once we got back home.
The appointment was set for Friday at 3pm. Roy had to be gone all day so I adjusted my schedule so I could be home by 3pm. At 1pm I was at home doing errands when the Electricians called me, they said that they were running early and if it was okay to come by in 20-30minutes. I said okay and decided to wait for them and finish my errands afterwards as long as I can get everything done before 3:30pm. By 1:30pm, no electrician, so I called them to see how much longer and if had enough time to take a quick 20minute jog. The Electrician said they are on way, so I waited some more. I was getting stressed because none of my errands was getting done and it was getting later. 20 minutes later (it was around 2:30pm by now) I called electricians and asked if I could just reschedule because I really needed to get my errands done before the weekend and it was Friday. They said they were still on their way. I asked again, if I could just cancel today and reschedule. The lady said they are booked until next week. I said I will take my chances and call them back.
The Following week my Husband called the Electrician and left several messages un-returned. The next day he called them back, this time they picked up the phone. He asked them if he could schedule an appointment. She pulled attitude with him saying that we were on the no call back list and they refuse to come to our house. My husband then called our Landlord and told him of our problem. Our Landlord said that they were His electrician and for us to find our own electrician, have them fix our Ceiling Fan & Outlet and to deduct it from our rent as long as it is under $65-
Really????? WTF???????? How is this Good Business??? Sheeeesh!!!!

Posted by Stacy Burke at 8:48 PM No comments: 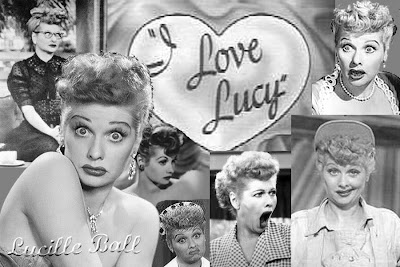 Happy 100th Birthday to my Favorite Star EVER Lucille Ball! My Dream was to become Lucy in I love Lucy, she had the Perfect Friends, The Perfect Husband, The Perfect Hair Color and The Perfect Life! If ever I could jump into a TV Show and make it my Life, It would be I Love Lucy!

Lucille Ball Owned her own Studio, was the First to have a Pregnant woman on TV and have an Episode about it. Lucille Ball was the 1st to bring inter-racial Marriage to TV. Lucille Ball was the 1st Cougar, she was older than Desi, her Husband. Desi invented the 4 cameras on Set. Desi & Lucy used Film to tape their TV show. I read many books about her. She was a True inspiration & pioneer to me, I love Lucy!!
Posted by Stacy Burke at 7:20 PM No comments: