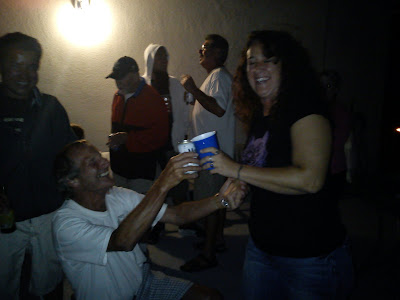 Mick is a UK postman. Around 14years ago, he took his Holiday (what they call our Vacation) in the USA. For no reason, he came to Long Beach California, maybe The Queen Mary that is docked here might have something to do with it. From his hotel, he took a cab, he ask the cab driver to take him somewhere fun where he could get a cold beer. That cab driver took him on the Famous 2nd Street in Belmont Shore and dropped him off at a Murphy`s Irish Pub. Mick thanked the cab driver and walked upstairs to Murphy`s for a cold pint of beer. That night he met Graham (our England Import) and The LBC Wack Pack. True friendships were born that night. Mick had a grand time.
Ever since Mick`s 1st visit to the Shore on his Holiday, he has returned at the Same time during Summer for the past 14years and counting. He gets a hotel just outside the Shore. He gets up fairly early, puts on his shorts & his walking shoes and starts his long all day walk. He walks to the towards the shore, down 2nd street, through Belmont Shore, to the Peninsula, then along the Ocean, stops at The Pier at the Belmont Brewing Company for a pint, then he walks to the Queen Mary and ends his journey at Murphy`s. Unless it is a Friday night, on a Friday, after Mick`s walk, he will stop at his Hotel room to get dressed up in slacks, button down shirt and dress shoes. I have learned through my English friends that is what Proper 'Bloaks' do on a Friday Night. Friday Night guys get dressed up, that is the Rule.
Mick is true to his routine, he never strays. It was Only 4 years ago he added something to his weekly schedule. He Now comes to our weekly Monday Summer Night Grilling Dinners on the Roof. He shows up after his walk with a bag of Bud Light, his favorite Beer. He laughs, eats and stares at the View. He says it is Paradise and it is good to be home. After a few beers Mick will get down on one knee and propose to a Girl in hopes to get his green card and move here. Mick is joking, but yet, I think he maybe a bit more serious then everyone thinks.
It is always sad when it is time to say goodbye to Mick. It is a grim reminder that Summer is coming to a Close and that it will be another Year before seeing our dear Friend Mick. So Ladies, take a gander at his photo, if you happen to see Mick walk by, say hello and if he gets on one knee, for god sakes, Please say YES, We want Mick Back Home where he belongs!!
Posted by Stacy Burke at 6:36 PM