For over a week now, I have been sick from the Flu that my Husband gave me during Christmas. This Day was the day after New Years Day. I had a bunch of stuff I bought from Amazon at our Mail Box Place. Since I still have no Car and I was to sick to walk in the cold rain to get pet supplies that we needed, I bought Bulk Cat Litter, Bird Food, Dry Cat Food & Wet Cat food. I was prepared to grab my red wagon and go get it, but Roy insisted that he will pick it up when his friend comes, who has a truck. I agreed that would be best and then continued to clean the house and take down the Holiday Decorations. Roy went to go get the pet supplies I bought and when he brought them upstairs, he threw the very large heavy boxes at me with a loud Thud! He then yelled at me that he brought these up to me out of the kindness of his heart. I replied to him, 'these are the supplies I bought with My money for Our Animals, but Thank you for bringing them home'.
He then threw a $450- dental bill at me and asked me when I was going to help him with his dental bills. He was Irate, I remained calm. I am trying to learn how to handle things better then in the past. I would usually yell back at him, bring myself down to his level and discrediting any value I had to say. I would usually say something bad and end up being just as guilty as he was if not more. But this time, I held my ground and in a calm low voice, I told him that I already gave him $200- towards his dental bill, I just spent $200- on the rental car that I used to drive us to the Playboy Mansion for New Years Eve, I also just spent a lot of money due to the Holidays and that I will need a little time before I can help him out with the rest of his dental bill. He yelled back at me that he has No sympathy for my lack of funds due to my choice of spending and he has nothing to do with any of that. I told him that I am not saying I wont help him pay his dental bills, it is just that I make less money than he does, yet we share the Rent & Bills of the household and it will take awhile. He protested that it is not his fault that I make less money. I could tell that no matter what I said would matter. No matter what I did or said would not be enough.
I reminded him that I am only going to spend, use and live off the money that I make. I refuse to get into any savings or the money I put away that my deceased grandparents gave me. I reminded him that, that money is my Grandparents blood, sweat and tears and was their life savings that they choose to give partly to me for security. I was not going to disrespect them by using it irresponsibly. I put that money away that I cannot even get to it if I wanted. It is a savings Only, nothing else. He just scuffed at me and said something like, if he had money given to him that the shoe would be on the other foot.
I just remained calm, which is hard for me to do, I wanted to yell back at him, but I refrained. I told him that I had an idea. He spent almost $900- on a Gold & Diamond tennis bracelet for me on Christmas. I told him that I usually never wear gold, I never really wear fancy jewelry like that, especially a bracelet......and even though I appreciate the thought.......he really cannot afford to give me such a gift. I asked him if it was okay if I returned the Bracelet, used some of the money to fix my wedding ring, which means more to me, it is a bit big for me, I am afraid I will lose it and one of the diamonds fell out.....and then use the rest of the money towards his dental bill. He hated that idea. He yelled even more at me. Calling me greedy and shallow and that when he told his friends that I didn`t like the Christmas present he gave me that they all told him that if I wasn`t married to him, to break-up with me. I don`t really believe all that he said, but it still hurt. Even though he went on and on, I stayed calm and stuck to my guns. I plan on returning his gift he gave me. I hope to get my wedding ring fixed, which means more to me, I wear everyday and that way he can still say he bought me something nice for Christmas and I can use the rest of the money to help him with his dental Bill. I would hope that would make Everybody happy......I would Hope.


UPDATE Jan. 12th 2013:  I went to return the Bracelet - they in turn reversed the funds of $900- back into my husbands credit card. I then went and bought a $30- small simple silver ring band tight enough to wear on top of my wedding rings so they will not fall off of me and then gave my husband back his dental bill of $450- and told him he can now pay that bill with the funds from the bracelet. He then gave me the $30- for my Silver band I bought as my Christmas Gift. All worked out well! 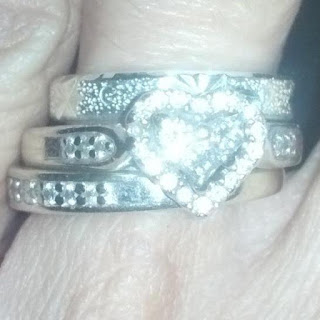 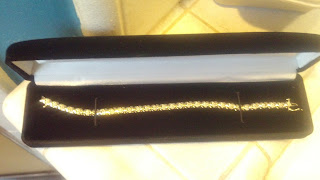