This is an Update to my Post: Protecting my Grandma, Fighting the Vultures http://romantictorture.blogspot.com/2011/01/protecting-my-grandma-fighting-vultures.html 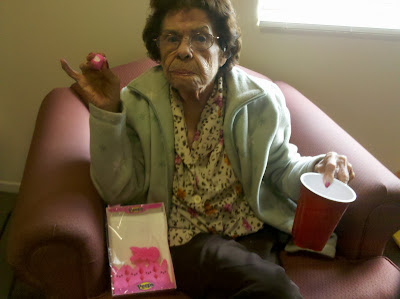 March 29th 2011: I have been going to Visit my Grandma Every Tuesday. I always bring her a Cheeseburger, a Beer & Other Treats. Peeps are her Favorite Treat, so since it is Easter season, I have Been bringing her a Lot of Peeps - She Loves Them so Much, She eats 2 Packages in One sitting!!
I also bring Photos & stuff to decorate her Room. I do not try to bring to much because she always Asks why am I bringing more stuff in her Room. She Says she is going home soon & she doesn`t want people to take her stuff. I reassure her that No one will take anything, that if she moves, I will take everything to her & if anyone takes anything, that is okay because I will replace it for her.
She always says things are missing from her room - but after a few minutes going through her room - I find everything & Put it back where it belongs - I think she moves them & forgets where she put things. However there were a few Photos missing that I could NOT find - No Worries, I have Copies & will Re-post Next Week. I also noticed that a Few Family Members still need to be added to her Photo Wall, so Next week I will print out copies of some family photos and put them up for her.
Sometimes she thinks she is still going to be going back home to live alone, but that unfortunately wont be the case. However the good news is that she is saying she is going home less and less. She is starting to talk about the ladies that live there and how much fun they have! They keep her Very busy there. They have Wii Bowling, Bingo, Church Services, Card Games, Movie Nights, etc. They Serve Breakfast, Lunch & Dinner in their Little Restaurant area. They also have a Patio area outside with a Grill. Now that the weather is getting better, I might try to plan a BBQ Lunch with her outside!